Like the fingerprints, your DNA fingerprint is also unique to you. DNA Profiling Test or DNA Fingerprinting is the process of establishing the characteristic DNA Pattern of a person.

DNA Profiling is known by specific other names, like DNA typing, genetic fingerprinting, genotyping or identity testing, etc. The DNA profiling process is based on the isolation and identification of variable elements in the DNA sequence, which is unique to every person except identical twins.

Determining minisatellites (Microsatellites) in a person’s genome to identify and establish a unique pattern is an integral part of the process. Two people having identical DNA fingerprints is possible only in the case of identical twins.

Currently, DNA profiling is done by the technique called STR Profiling. Nowadays, a DNA Profiling test relies on microsatellites rather than minisatellites. STR analysis is highly sensitive, so it only needs a comparatively smaller amount of DNA to produce precise results. The test we propose consists of 24 genetic marker profiles that can be used for legal purposes or for reasons of peace of mind.

Potentially, any biological sample from the human body may serve as a viable DNA profiling test sample. However, a buccal swab and blood are primary samples for testing, while hair, nails, and other biological samples are alternative samples for DNA profiling. In terms of efficiency, blood and mouth swab samples both are the same. However, due to being painless, easy to handle, and carry, the buccal swab is the most preferred. 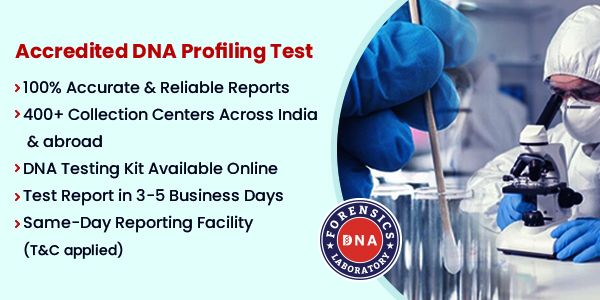 Uses of a DNA profiling test include

At DNA Forensics Laboratory Pvt. Ltd., we are providing accredited DNA Profiling tests at affordable prices. Besides providing 100% accurate and reliable results, customer confidentiality is among our topmost priorities. Contact us to learn more about a DNA Profiling Test in India.