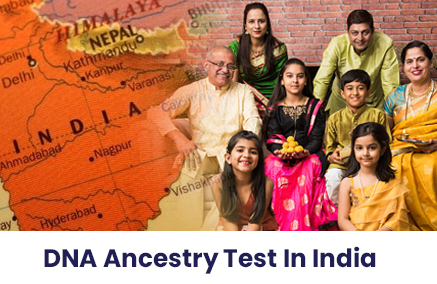 Ancestral Genetics DNA Test is based on thousands of samples from populations around the world to detect DNA markers that can provide clues to your ancestral history. At DNA Forensics Laboratory Pvt. Ltd., we strive to provide you with a simple and affordable way to unlock various pieces of information from your ancestral past. We offer a variety of Ancestry DNA tests. Our goal is to provide you with the latest and the most advanced DNA Ancestry Test in India, allowing you to bridge the gap between you and your ancestral past. We are offering specialized Ancestry DNA tests for different types of information needed. The DNA Ancestry Test in India can be done in four main configurations or types. Our Ancestry DNA Tests can provide your information like the origin of your father’s or mother’s side of ancestors, location-based ancestry tests, and many more.

DNA Ancestry Test In India – How We Do It!

We use Ancestry Informative Markers in a DNA Ancestry Test in India to predict a person’s ancestry. One may have his/her ancestral roots to Northern India, Southwestern India, Southeastern India, Western Siberia, Silk Road, Northeastern Siberia, Northern Mongolia, and Eastern Siberia, Northeastern China, Sino-Tibetan, and Hmongic Southeast Asia, Central Southern China (Yunnan and Guangxi), Tuva, Japan, Bougainville, Austronesian Southeast Asia, Papuan New Guinea, Austronesian Oceania, and Arabia ancestry. These forecasts are based on statistics derived from the frequency, or even rarity, of certain genetic markers within populations. We help you choose the best DNA Ancestry Test in India to go for. Scientific evidence shows that modern humans evolved 400,000 years ago in Africa and began to move outward. Special sections on the Y chromosome, called Short Tandem Repetitions (STR), are examined to determine a person’s Y-haplogroup, revealing the geographical origin of their ancestors, as evidenced by common DNA markers.

Note: Only men have the Y chromosome, but if a woman wants to know more about her paternal ancestry, she can ask her brother, father, or other members of the same paternal line to give their DNA sample for the Paternal Lineage Ancestry Test. Mitochondrial DNA (mtDNA), which is carried out to both male and female offspring from the mother, found the base for the Maternal Lineage DNA Ancestry Test in India or anywhere else, for that matter. Large groups of people, called haplogroups, which have the same genetic profile in their mitochondrial DNA, are studied for lineage testing – maternal lineage ancestry test, in this case.

GPS Origins ancestry DNA test is the latest and the most advanced type of DNA Ancestry Test in India.

GPS (Geographic Population Structure) testing technique assumes that each DNA signature is unique but shares many characteristics with the populations or tribes from which it originates. This type of ancestry test includes complete ancestral inheritance, including migrated roots with important historical events and date stamps to describe your DNA evolution over time. The GPS Origins test is highly accurate, but it could be affected by the origin of the family. If both of your parents are from the same country or geographical location, the test result will be accurate but slightly different if both parents are from different continents.


A Descriptive personalized report of DNA Ancestry Test in India

You will receive an ancestry test report listing your unique DNA mix and the migration journey from your deep genealogical heritage.